How Law Firms Can Fight Back Against Fake Websites

Impostors who clone law firm websites or pretend to be lawyers in order to scam the public have come out of the woodwork in recent years, leaving many firms wondering what they can do to protect themselves from the same fate.

Last year, the Houston Bar Association filed a lawsuit claiming an entity calling itself Walsh & Padilla PLLC stole the identity and images of several actual attorneys and used them to create a “sham” website to defraud elderly individuals in the United States and Canada, an illegal ploy that highlights a not-uncommon problem surrounding alleged fraud against legal consumers across the globe.

One action law firms can take is litigation. The lawsuit brought by the Houston Bar Association against the fake law firm Walsh & Padilla last year yielded a positive result.

According to Houston Bar Association president Alistair Dawson, a partner at Beck Redden LLP, the organization filed suit in federal court after it learned the alleged fraudsters’ website had used a bar member’s identity and images and had purported to be “endorsed” by the bar association.

The organization was able to quickly obtain a restraining order against the company that hosted the website, and within minutes of being handed the TRO, the South African host had removed the site from the internet.

“If you draft the order broadly enough to include the domain hosting companies you can send them a copy of the order and they’ll take down the website,” Dawson said. “Then you can decide if you want to pursue any further litigation after the immediate harm and immediate threat is eliminated.” 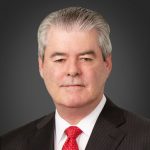